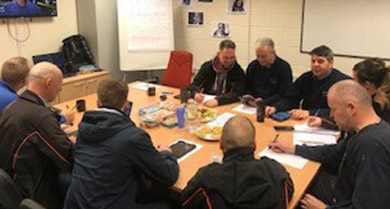 As part of our Diversity & Inclusion calendar, in October PH Jones were celebrating Black History Month. Black History Month is an important opportunity to celebrate the achievements, contributions and leadership of black people, not just in the UK, but throughout the world. The theme this year is ‘Black Migration’, which refers to the Windrush generation, a term for the movement of African Caribbean people to Britain – marking new destinations and subsequently new social realities. Many ask why it’s called the Windrush generation. It’s the name of the British troopship – HMT Empire Windrush, which anchored at Tilbury Docks, Essex, on 21 June 1948, carrying hundreds of passengers from the Caribbean to help restore the then post-war Britain.

Our Manchester branch arranged for the team to have 1 hours downtime so they could get together and partake in a fun quiz and watch a couple of informative YouTube videos about black history. The quiz questions were based around black iconic historical figures like Martin Luther king Jr, Malcom X and Rosa Parkes and historical events. We laid on a healthy breakfast for everyone attending which consisted of fruit, crumpets, breakfast bars and croissants.